In the past few months I am part of this hectic Digital Nomad community in Madeira. The openness and the proactivity doesn’t fail to surprise everyday.

Getting into the hike

Since my arrival here I wanted to do the hikes that Madeira is famous for. Unfortunately, I was not able due to some old foot injuries. After two months listening and listening about the hikes and my foot feeling better I decided to give it a try. There was a plan for a hike this past Sunday as part of the “Sunday hike” a tradition that few digital nomads started (Alex and Jason I am talking about you :)). 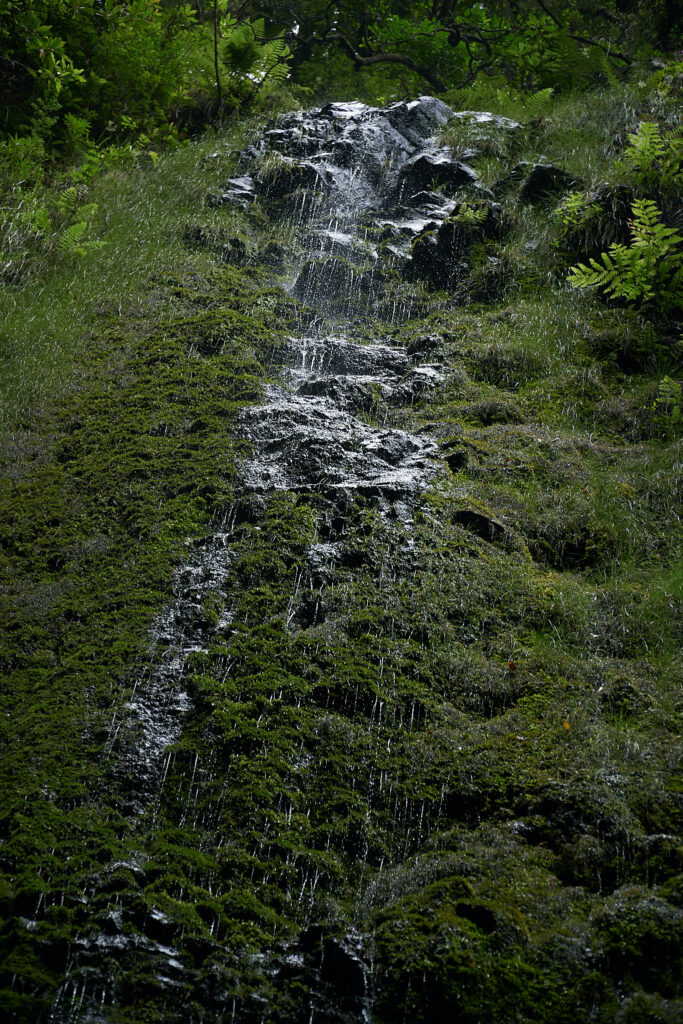 As magical as this community is, I simply wrote to the chat that I want to join the hike and I am looking for a ride. Laura wrote: I will join and I have few spots. Then Jane wrote that She and Arr will join, and then Lidia… And here we are the next day, few fresh made friendships at 8:45 departing to Seixal to do the Chão da Ribeira waterfall hike.

Little while ago we started writing about the indigenous trees in Macedonia. We prepared some of those posts during my stay in Madeira. Treebanks is all about trees and that made me wonder: Are there any indigenous trees here from Madeira? And yes there are. The Laurisilva of Madeira is an outstanding relict of a previously widespread laurel forest type, which covered much of Southern Europe 15-40 million years ago. When European continent was much more humid. 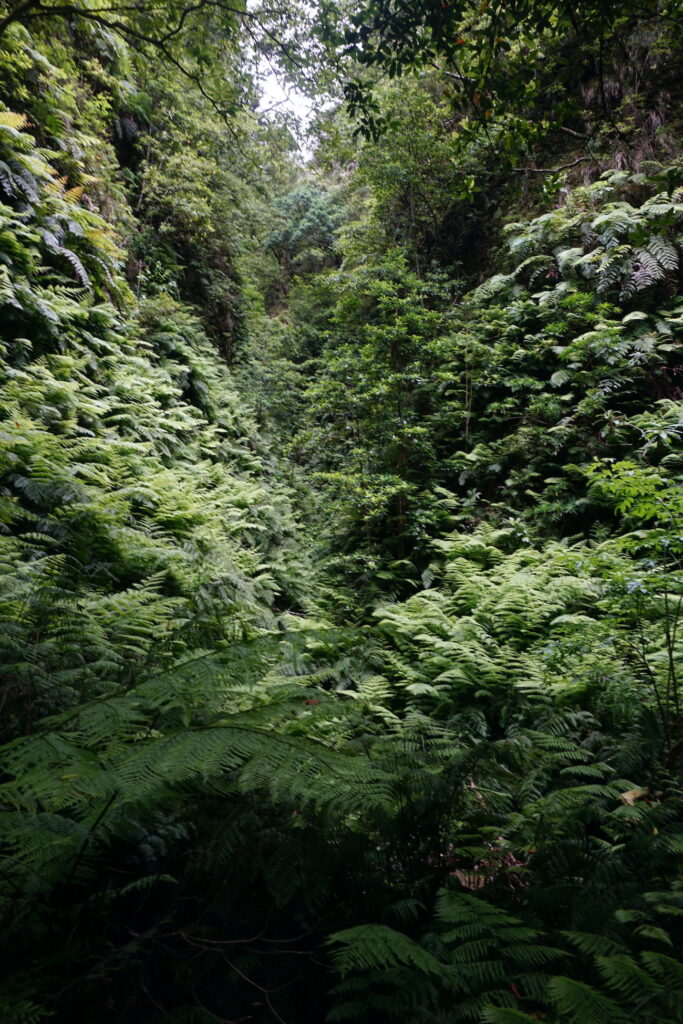 You might be guessing where this is going. Yes, the hike that I happily described in the first few paragraphs is taking place in part of the Laurasilva, the forest protected by UNESCO for “Outstanding Universal Value”.

First steps in the hike

The moment we started walking, just by watching the clouds gently touching the hills, probably talking what the weather will be like today I forgot about everything. It was us the hikers, the fresh air, the continuous meditational sound of the river, the trees and the hills touching the sky.

After few hundred meters we reached the hills and the forest. Old yellow, reddish and orange fallen leafs covered the ground we were stepping on. In the Laurisilva there are more than 500 endemic species of invertebrates, including insects, arachnids and mollusks. 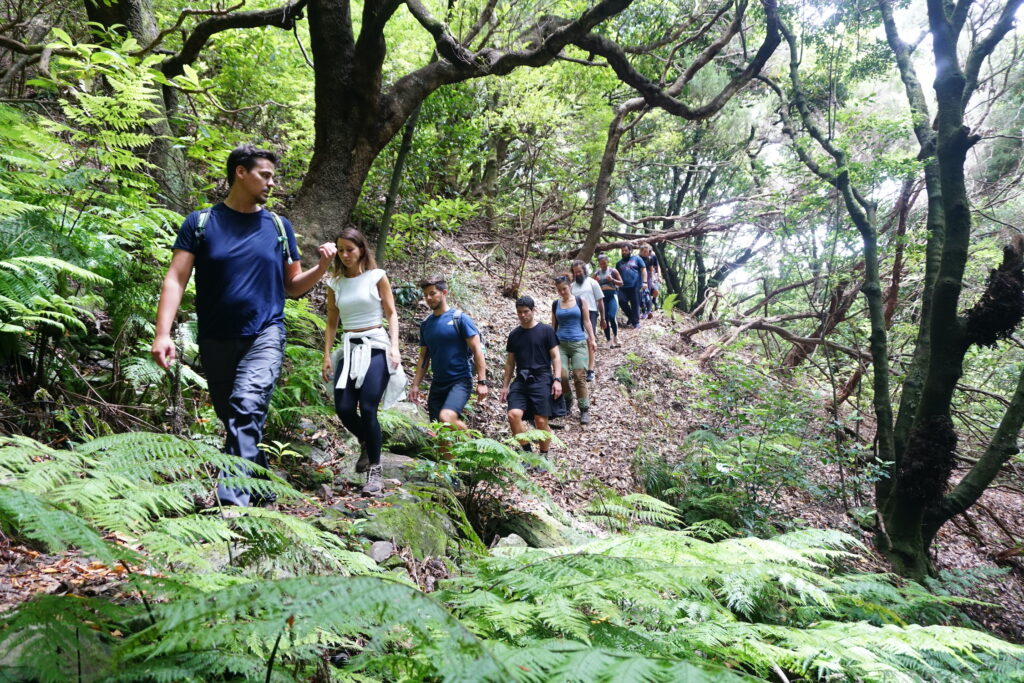 Most of the property is believed to have never been cut and includes some massive old trees, possibly over 800 years old. Еven from before the island was settled. Around the old trees there are bunch of young sprouts and laurel tree seedlings. During the hike I managed to collect leafs from all the laurel trees that grow in the Laurasilva. Since Treebanks is all about trees, here are the tree native laurel species:

Ocotea foetens – called til or stinkwood. It is evergreen and grows up to 40 m tall, a common constituent of the laurisilva forests of Madeira and the Canary Islands. It is rich in essential oils, which give an unpleasant odor to the wood when freshly cut. Ocotea foetens was sacred to the Bimbaches, the older inhabitants in the Canary Islands, and was one of their symbols

Apollonias barbujana – the Canary laurel or barbusano, is perhaps the only species of flowering plants belonging to the genus Apollonias of the laurel family.

Laurus novocanariensis – a species characteristic of laurel forest named laurisilva in Canary islands. Until 2004 it was considered the same species as Laurus azorica. This is a species endemic of Madeira and Canary Islands. A characteristic of the forest of Laurisilva next to Barbusan tree (Apollonias barbujana) and the Til (Ocotea foetens).

The story to tell moment

No good adventure is adventure without something going sideways. At one moment during the hike the laces of my cheap bag broke and my bag went into the abyss. With some team effort and help from Joao, Cyn and Ludo we claim it back and saved my wallet.

Somewhere in the middle of the hike there is a waterfall that forms a natural pool. The perfect spot for long break with amazing scenery and a for cold and refreshing swim. Every moment during the hike you think that the climax is reached and a moment after, the bar is rises higher.

The route continues with a waterfall that forms a levada that goes into long tunel. On every step in the tunel I was imagining the obstacles that the workers went through digging this tunnel 3-400 years ago. You exit the tunnel and you see this view. Eventually, you end up with this beautiful photo in between two natural waterfalls. 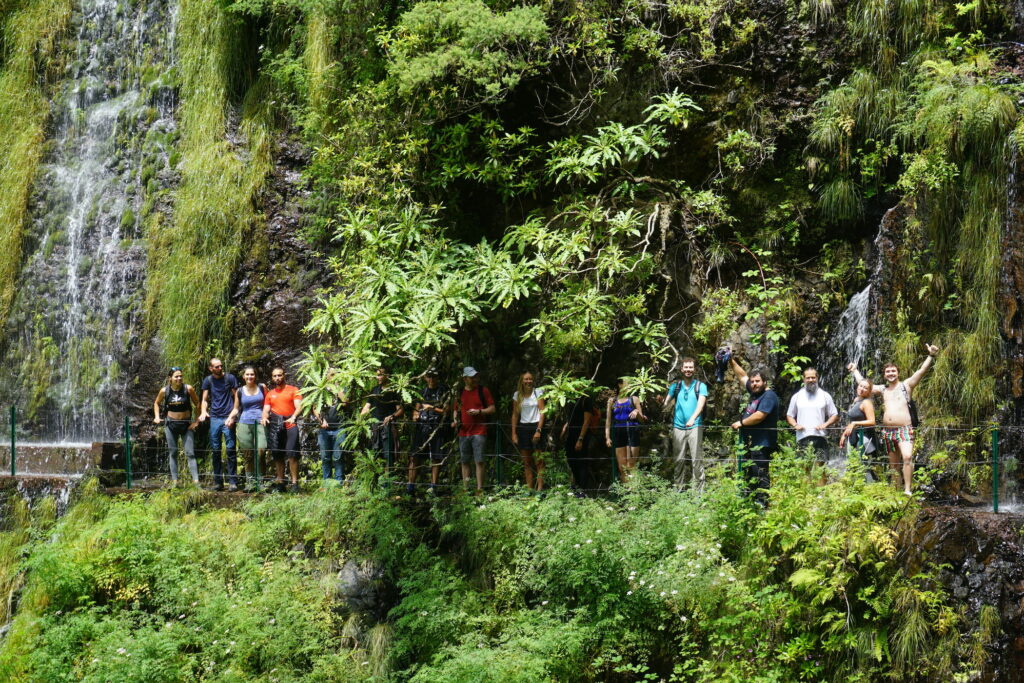 After few dead ends we found the path to go down to our cars, a moderate steep downhill with stairs made from wood. We ended up this epic hike with this cute group photo at the Chão da Ribeira which translates as “Riverside ground”.

If you want to know how you can help us plant more trees, subscribe to our newsletter and we will plant a tree for you. For more info click here.

The hike I will always remember

But wait it does not end here. The next day before the salsa class we were recollecting impressions about the hike. After hearing our discussion. Lili (a local madeiran girl) told us that every year in Chão da Ribeira there is feast. Аn old Madeira tradition, held on the last weekend of January. Where locals from Seixal gather and cook the “Panelo”, a true Portuguese stew, served on the floor on a towel, cabbage leaves and laurel. The tradition is to eat from the site where it was served, i.e. all ate the same place.

And here I am finishing this post and thinking that we unknowingly did our own Panelo, I borrowed some bananas, gave some sandwiches, tried some biscuits and dried fruits, we all ate from the same plate. 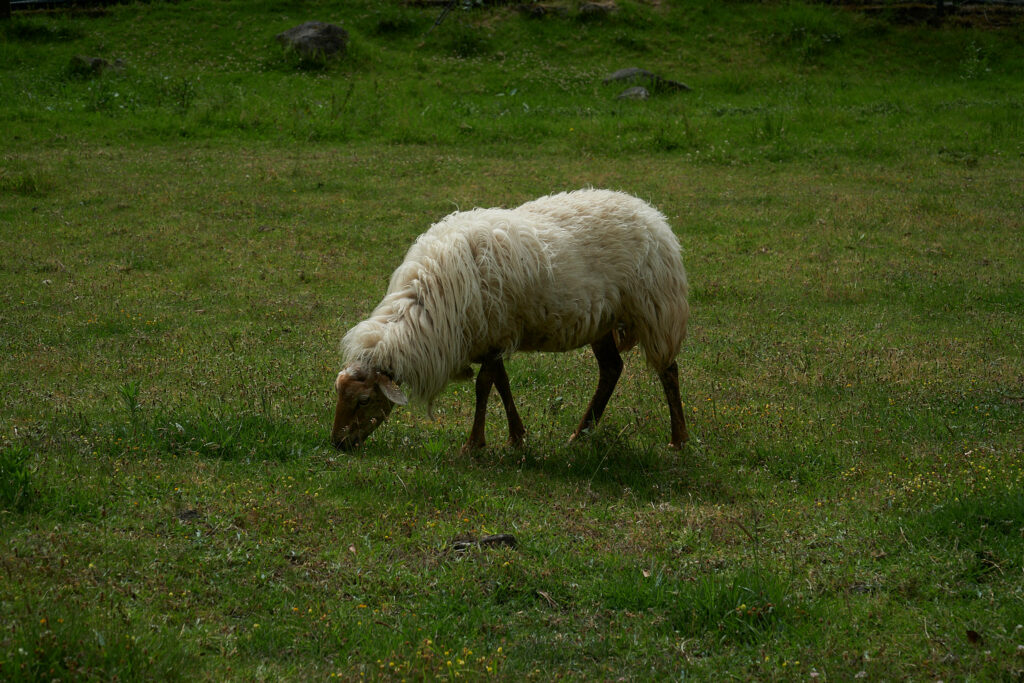 Photos are courtesy of Lidia Szekely and Zdenek Malik

400 trees planted within a glance

2000 trees for the Endava “Thank You Forest”

6000 trees planted near Radovish with volunteers

We will plant a tree for each newsletter subscription. Our goal is to reach 10k trees. Leave your email and plant a tree!